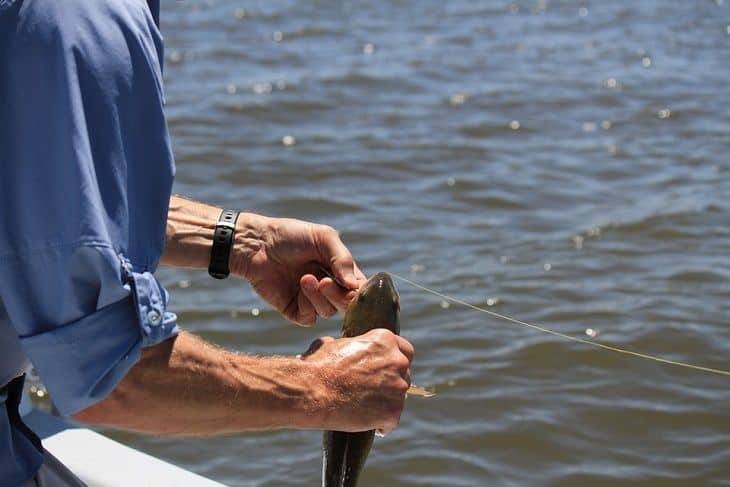 The Art of Setting the Hook

If you ask to average anglers about the most important aspects of bass fishing, you’d get a myriad of answers from lure selection, electronics, equipment, or fishing out of the right kind of boat. I bet, no one will tell about the hook set, while it would rank as very important to many of the aspects.

When I was a fledgling bass angler, I had taken today’s top Pro anglers under the wing.  I’ve tried to emulate the way he sets the hook, and get that same “whoosh” you’d hear when he set the hook with a jig. While I’ve learned enough to become a proficient hook-setter, I still don’t think that I’ll ever perfect the technique. I don’t think that anyone ever can really perfect the hook set. There are simply too many variables that go into it.

Among the variables that can be somewhat controlled are equipment, and technique. Those that are out of the anglers control are the way the fish are biting, distance from the fish and the angle of the hook set, and other individual circumstances.

Principles of Setting the Hook:

Lets take a look at some of the things we can control. The rod has to be the single most important part of the hook set. There are two factors within your rod that influence whether you’ll have a good hook set or a miss, or worse yet- lose a good one halfway to the boat. Those factors are speed of the rod tip, and the stiffness of the rod itself.

Simply stated, a longer rod will pull the line farther and faster with the same amount of effort as a shorter rod. By the same token, a stiffer rod will direct more energy to the hook than a wimpy rod with the same effort expended. Somewhere in the equation, there will be a point of diminishing returns, but suffice it to say that the longer and stiffer rod that you can use, the better chance you’ll have of getting a good hook set.

Rod material makes no difference in the hook set. While it may make a tremendous difference in feeling the bite or in other factors, there will be little difference in the amount of power or energy delivered to the hook whether you use fiberglass, boron, graphite or a composite. Rods made of any material with the same relative stiffness will deliver the same hook-setting energy.

How long has it been since you’ve seen a pistol-gripped rod in a pro anglers boat? Long handled rods have become the rule because of their hook-setting and feel advantages. Sticking that long handle in your belly gives the rod a pivot point with a base that benefits your hook-setting action.

So many advances have been made in the fishing line industry in the last few years that its hard to keep up with the changes. Co-polymer and braided lines have been developed which have virtually no line stretch, and this in itself has improved the hook setting capabilities to the average angler. There are still many applications for monofilament lines, especially when fishing crankbaits and some lures where a jaw-jerking hook set is not required or desired. There are as many arguments about lines as there are about favorite boats, but suffice it to say that when you need a quick, sharp hook set, go with one of the new low-stretch lines.

You could write a book on the importance of sharp hooks to the bass fishermen, and it’s been beat to death in every bass fishing magazine for the last three decades. Just make sure that the hooks on your lures are as sharp as you can get them, and lets leave it at that. Today’s laser-sharpened hook points are light years ahead of old hooks, and there’s not a lot the average angler can do to improve them right out of the package.

Sorry. No data so far.