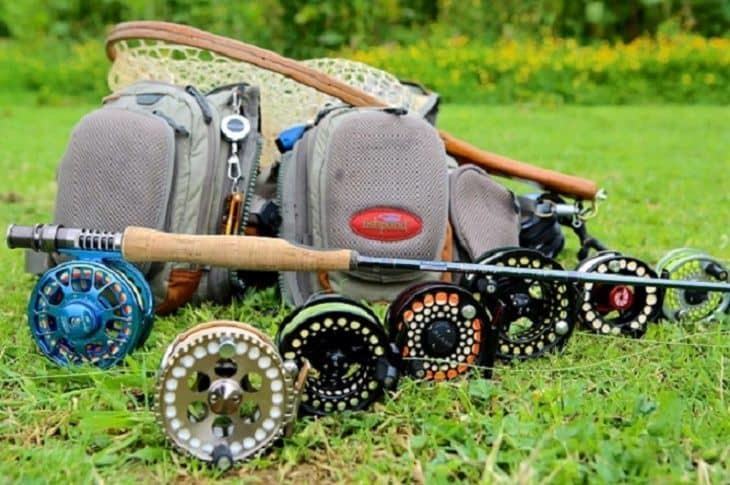 How to Choose the Right Fly Fishing Reels

A fly fishing reel attaches to the bottom end of the fly rod and holds the fly line. They are typically made from aluminum, plastic, carbon fiber, or various polymers. Fly fishing reels are constructed very simple when compared to a normal fishing reel. For every one turn on the handle, the spool of the reel rotates one time. The spool of a conventional fishing reel may turn 6 times for every turn of the handle. The quick rotations of normal fishing reels require many gears, parts, and bearings to make them work. The one to one spool rotation of a fly reel makes using them a blast because retrieving line with a fish-on is challenging and intense!

A fly fishing reel is a tool to hold your fly line, apply the brakes to a speeding fish, balance your rod, and retrieve your fly line.

One of the most important functions of a fly fishing reel is to apply drag to a fish that is swimming away from you. It works like the brakes on your car, only instead of stopping the car, it stops the fish. Instead of calling it a braking system, it’s called a drag system. Without some sort of drag system, the reel spool would spin loosely and cause your fly line to tangle very quickly. Drag systems also keep a strong fish from taking off with your valuable fly line. Although the materials and designs vastly differ, there are two basic types of drag systems.

The first is a very basic system called a “click and pawl”. They are designed with a plastic or metal-toothed gear (cog) that is attached to the interior of the spool, and a spring-loaded triangular “pawl” that rides against the teeth of the cog. They do not offer a lot of braking power but are appropriate for smaller species like trout or panfish.

The second is called a “disc drag system”, or sometimes called a friction disc drag system. This design allows an angler to adjust the amount of braking power, and this means it’s appropriate for many different types of fish. Its design involves sandwiching several small discs together made out of aluminum, nylon, silicone, graphite, or other material. The tighter the drag knob is turned, the more the discs are compressed, and the more friction is created. This system provides a wide range of adjustment and depending on the quality of the build, it’s suited for all types of fly fishing.

Fly rods are often very, very light. A typical 9-foot long trout rod may only weigh 3.5 ounces. A matching fly reel also needs to be very light so that it doesn’t feel like you are casting an anchor attached to a toothpick. Usually, a properly matched reel will evenly balance the length of a rod somewhere near the top edge of the grip.
Retrieval

An obvious, but really important job of the reel is to retrieve the fly line smoothly and quickly. When fighting a fish, it’s critical to keep the proper amount of tension on the line. If the fish is coming towards you, you’ll need to reel up the excess line as fast as possible. As the fish tries to bolt away it peels line off the reel and engages the drag system. To then retrieve the line again, you would need to quickly reel in the slack to avoid losing the fish.

Do you need a left hand or right-hand fly fishing reel?

Deciding which hand to reel with is a never-ending debate between fly anglers. Some will say that if you’re right-handed, you should reel with your left hand because you will not have to switch hands to reel once the fish is on. Others say you should reel with your dominant hand because you have greater coordination and can reel faster when necessary. Most fly anglers who have had long careers as conventional anglers will prefer to reel with their dominant hand as it is considered more the “norm”. The bottom line is that you have to do what is comfortable. It is simply a matter of personal preference. I lean to the former, and because I am right-handed I set up all of my reels to retrieve with my left hand.

Fly fishing reels are convertible from left to the right hand. Usually, it’s simply a matter of flipping over a disc, ring, or some type of switch on the inside of the spool. Every reel is different but most will come with directions and typically the change over is pretty simple.

Sometimes, depending on the fish you are targeting, you may rarely need your fly reel when it comes to playing fish. For instance, many times when playing a trout, it’s more efficient and easier just to strip the line in by hand. In this scenario, it’s just there to hold your line. So depending on the strength and size of the fish you are targeting it may be better to invest your money in simply an adequate reel, and putting the excess dollars into the rod and fly line. For other types of fish that are more powerful like Steelhead, Salmon, or most saltwater fish, having a stout reel is incredibly important, as it will tip the balance in your favor for being able to land a big fish.

Anatomy of a Fly Rod:

The spool of the reel holds the backing and fly line. It also detaches from the cage so that you can buy extra spools with different fly lines, and switch them out as necessary.

The cage is the main body of the reel. It houses the majority of the components of a fly reel. It’s designed to engage the spool and be integrated with the reel foot, drag system, spindle, and spool release.

A drag knob is a dial that either tightens or loosens the drag system. It works like a screw, and increases or decreases the pressure on the discs, allowing you to tune in the proper amount of drag by simply turning the knob.

The drag system works like the brakes on your car, only instead of stopping the car, it stops the fish. Each manufacturer has their own design, but the main job of a drag system is to impart friction to the rotation of the spool and the cage.

The reel foot connects the reel to the rod. It’s designed to slip into the reel seat on the fly rod.

The arbor is the interior portion of the spool that the backing and fly line are wound around.